What makes an organizational change consultant more successful than another?

There are certainly many factors, but in my opinion, there is one that is crucial.

Many change professionals that I help on a daily basis focus on helping transform the company by teaching new ways of thinking such as Agile, Enterprise Agility, or Lean, or frameworks such as Scrum, LeSS, or Safe.

I’m aware that everyone has their own approach, but I would risk saying that a large majority have never used a formal change framework to amplify the desired impact. So, strange as it may seem to you, many consultants are unaware of, or have almost never used a change framework.

Before we go any further, I want to tell you that I have decided to write two articles about the ELSA change framework. ELSA is a powerful framework that can be used in any organization and that empowers leaders and accelerates change.

This framework is included in chapter 8 of my book “Leading Exponential Change“. You can learn more about this and other frameworks in there.

I want to clarify that, from my point of view, a change framework is a set of structures that allow us to improve and magnify impact, and thus accelerate the adoption of change. These are also essential skills for any professional who is in a company that needs to transform in record time.

In this first article, I will talk about ELSA’s scientific foundations, so that you can gain some solid knowledge about this. In the second part, I will show you the framework and how to use it.

Imagine your organization has decided to embark on a business transformation. The leaders are willing to do whatever is necessary, and the sponsor is eager to begin. The company is poised to make the biggest economic investment in its history. Both the leaders and the sponsor are aware that this is a big first step and that in a few months changing will be part of the day-to-day operation of the organization.

What are the first steps?

In a company that implements a change using traditional techniques, executive team members will often give a presentation informing their employees about the new plan, followed by training the employees and implementing the changes in their processes. But if you are starting an Agile transformation, you will probably start by teaching new values and principles, and then you will implement a framework that improves how everyone works and makes decisions.

Agile transformations don’t always turn out as expected. In these cases, companies often want to restart the initiative after learning from past mistakes. In your company, though, this is the first time that something like this has been attempted. Executives will want to increase the economic benefits and position of the company in the market in the medium term. They will also want to increase and improve the shared knowledge and well-being of employees.

To achieve these goals, you will use the ELSA change framework.

You won’t start here by modifying processes or teaching new mindsets. ELSA believes that ways of conveying a message can alter employees’ brain activation, which means that they could use different forms of reasoning and produce different outcomes. This, in turn, will also help evolve processes and interactions for the better. There are a few questions to consider here:

2. Does the way you use language affect economic decisions?

Keith Chen, an associate professor of economics at UCLA, used a vast array of data and meticulous analysis to show that the grammatical structures of languages stimulate the brain differently, resulting in behaviors that support different economic decisions.

Languages that conjugate in the future tense, such as English and Spanish, distinguish between past, present, and future. But those that do not, such as Mandarin Chinese, use similar phrases to describe the events of yesterday, today, and tomorrow.

According to Chen, people who use languages without a future tense are 30% more likely to save money than those who use the future tense. This would obviously mean more money for retirement, less stress, and increased opportunities for undertaking new personal projects. When a future tense is used, ideas feel more distant and the motivation to save is diminished. Our brain focuses more on the short-term reward and less on the long term.

The way you use a language also has an impact on the skills you develop. The Pormpuraaw aboriginal community in Australia do not use the words left or right to refer to the position of an object. Instead, they use absolute directions such as north, south, or southeast to express location in their Kuuk Thaayorre language.

According to a study conducted by Lera Boroditsky, a cognitive scientist at Stanford University, and Caitlin M. Fausey, a professor of cognitive development at the University of Oregon, the Pormpuraaw community is remarkably good at staying focused and knowing where they are. On a research trip to Australia, Boroditsky and Fausey discovered that members of this community seem to instinctively know their spatial location and the direction they’re facing. They can organize images of their trip, in chronological order, from east to west.

Boroditsky and Fausey also realized that there are differences in how guilt is felt in different languages. According to their research, if a person who speaks Spanish accidentally breaks something, the person will tend to say, “Se me cayó <object>.” This translates roughly to a passive expression such as, “To me, it happened that <the object> fell.”

Additionally, when you hear a story from someone else, your neurons are fired in the same patterns as the speaker’s brain. This is known as neural coupling and it creates a very strong connection between the speaker’s brain and recipient’s brain.

I’m not saying you should start making all important announcements using the present tense, or that you should refer to left and right as north or south, or use Chinese during meetings. We should simply understand that small changes in how we communicate can alter the way people reason and learn.

If you want to influence people’s habits so that they do things differently in the near future, you Ahhhhh use certain ways of giving a message to make it happen.

In the second part of this article I’ll talk to you about how this connects to the ELSA change framework, and how you can use it to get company leaders to perpetually accelerate change.

If you enjoyed this article, why don’t you check the #1 book on enterprise agility and advanced change management techniques Leading Exponential Change 2nd edition? 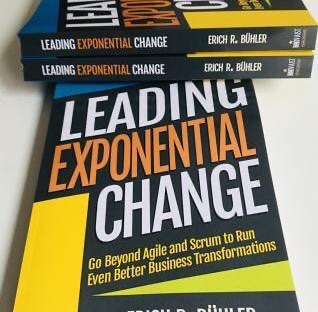