It’s now more than a decade since the Agile manifesto was written and even longer since Scrum was first used. It’s time to forget the Scrum framework as you know it, and I am about to explain why.

I have visited many companies in recent years who have been obsessed with creating more and more Scrum teams. In organisations with a larger flow of information exchanged among employees (social density), 4 or 5 people are needed to conform a new team, but in which silos exist or existed, at least 9 individuals per group are required in order to be able to count on the ability to create a specific software. Therefore from the traditional concept of Scrum, the focus becomes supporting and searching for different roles that are capable of making the development of a product a success. They focus on resolving a problem that is normally targeted towards what the tool can do for the customer.

However, this has changed – and has changed a lot – in recent years. Let us begin by understanding the current situation of the markets, which will allow you to understand what it is that you can do and where you ought to direct yourself or focus the efforts of your organisation.

Within the markets for which a software is traditionally developed, the value chain is divided into three part:

● Either the company produces (or creates) a tangible or intangible product,
● it is a distributor,
● or it is a consumer/end user.

In many cases the result can be mixed, but one of the above is always the predominant factor. The way in which money is most easily made is through the retention of the monopoly of one of these parts, for example, being the supplier or distributor alone, or integrating 2 of these areas in one company.

In the latter scenario you produce and distribute the goods by yourself. Both options have been employed for years and they ultimately allow money to be made more easily, as you are controlling the market. 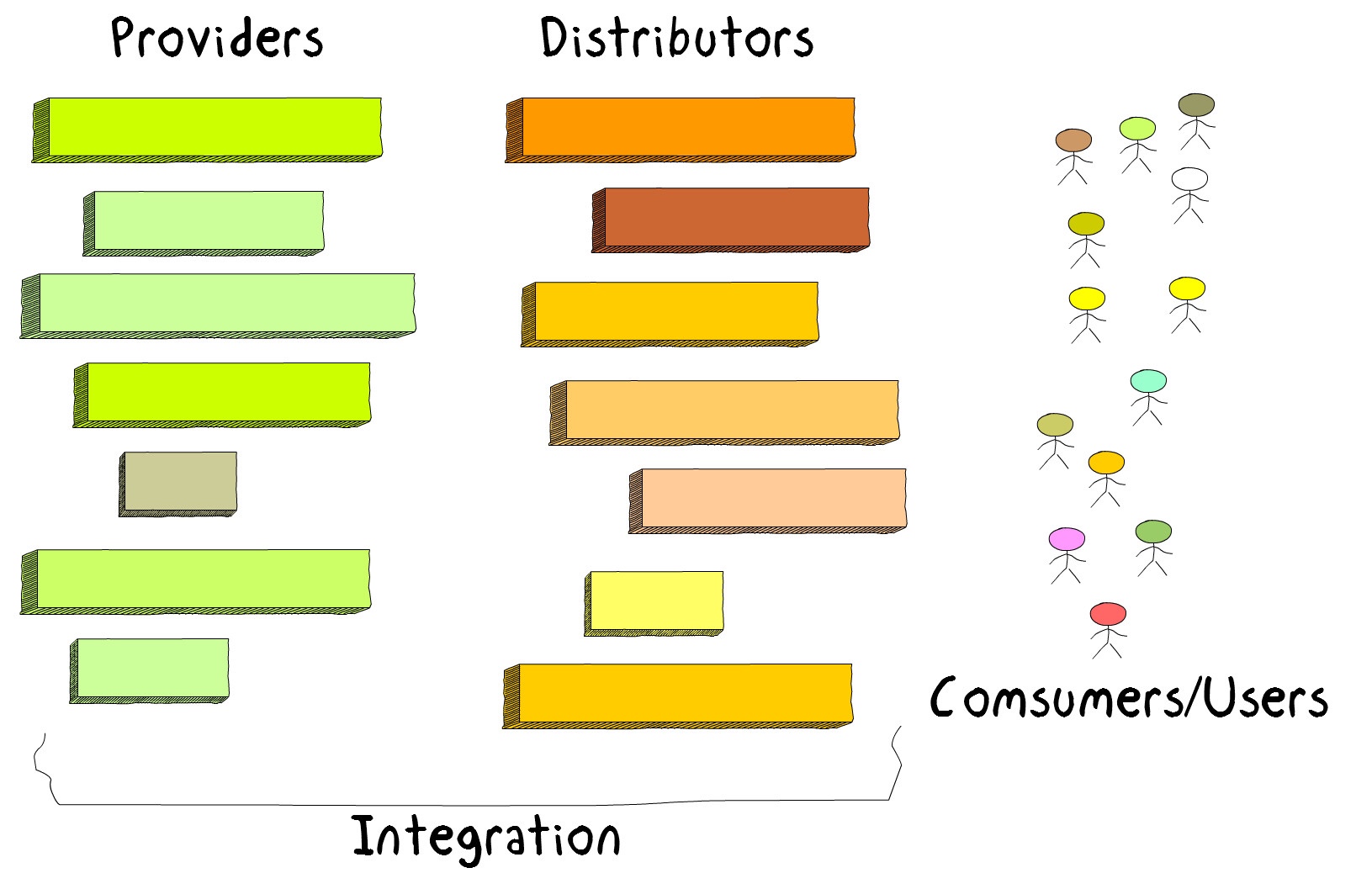 This is what we call integration: whoever creates/produces the service or product and whoever carries out the handling and distribution are integrated under the same block so, in this way, control a large part of the market.

Here the focus of software development is normally centered on Teams that can develop products which make it possible to unify the services of the supplier and distributor under the same umbrella.

If the supplier and distributor are not from the same company, the most effective way is through the attainment of exclusivity rights, something that will guarantee a strategic alliance.
Under these circumstances, it is considered that if you have a good product to offer (shoes, insurance, etc.),customers will come your way. For that reason the user experience takes a back seat given that here the crucial factor is relying on a strategic distributor plus a product and a software that can integrate both parts.

As the internet and smart phones became available on a massive scale and at affordable prices, the first disruption in the markets showed up, changing the structure, the rules and the way in which we see and create software.  The shift to digital allowed any enterprise to become a software company and to be able to distribute for free.

An airline or a train company no longer had to physically send out tickets, because now it was possible to integrate the supplier and distributor under the same Website and, as a result of that, the customer was offered the entire solution in a unified/integrated way.

This allowed transaction costs to be reduced to practically zero, easily expanding the software reach to hundreds of users in record time. This is what we call aggregation, and is part of the theory of Aggregation of Ben Thompson. 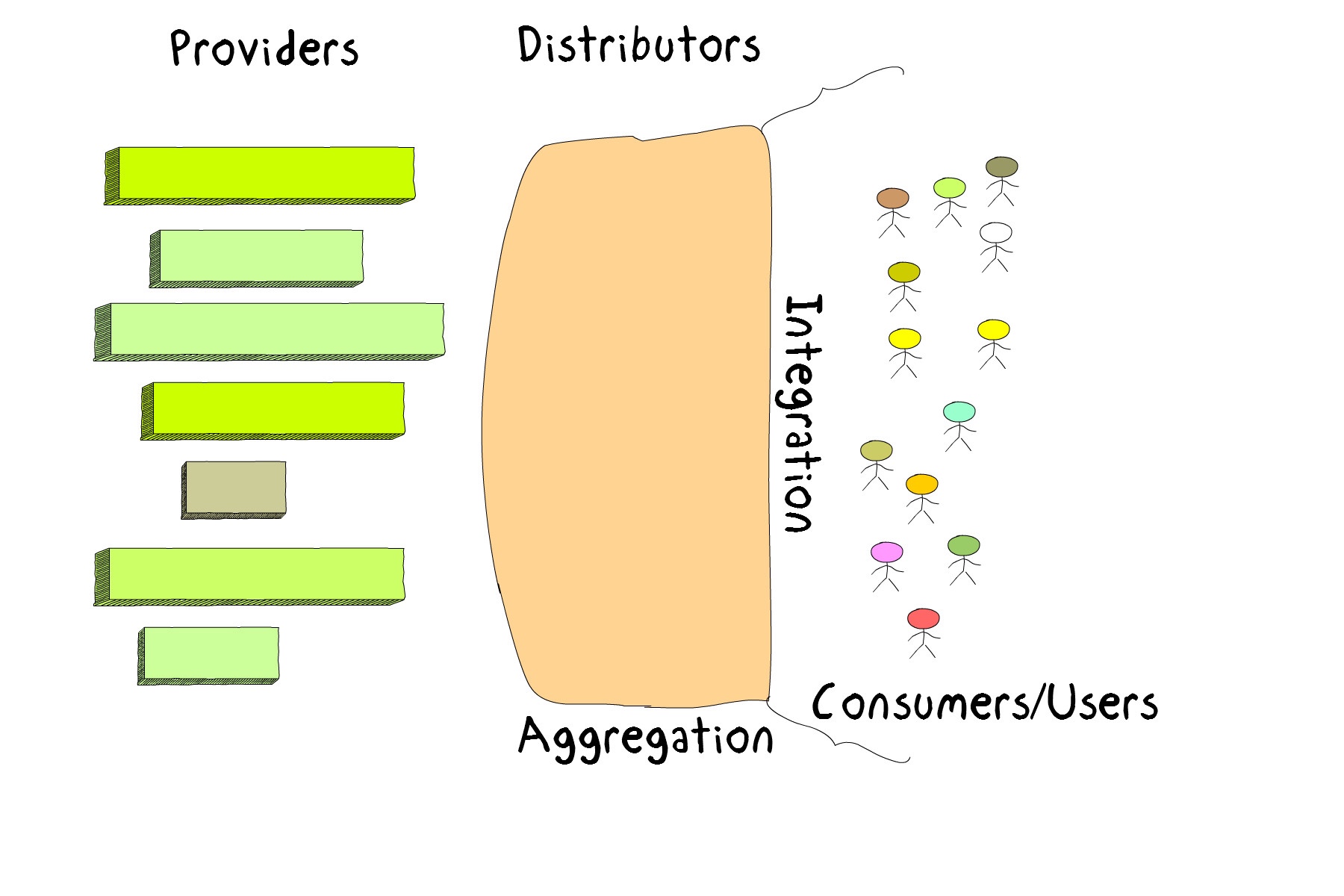 This first disruption fundamentally changed the concept of how companies competed with each other. A distributor no longer operated according to the exclusive relationship of the products that it could offer to a set of customers, but instead focused on the fact that with better software it could integrate production and sales with its users.

It’s here that a new factor began to come to life, which was unknown to Scrum teams: The User experience.

The company that was able to unify supplier and distribution with an excellent user experience would win more customers, which would make it possible for more people to use the product and therefore, provide greater feedback for the development teams (Scrum), something that would allow for quicker growing and improvement of the software product (virtuous cycle). This would, at the same time, help Product Owners to focus with more ease on the particular functionalities that are desirable for the market.

Appearing at this point is a second disruption that was originally described by the so-called Law of conservation of attractive profits. It indicates that when a disruption occurs, the incumbent previously dominating the market (for example a ticket sales firm) would no longer do so and its profits would fall, however they wouldn’t be lost, but rather they would be transferred to another part of the chain, most likely adjacent.

Let me give you an example to make things a little more clear; before the Internet, in order for hotels to get more guests they would offer rooms under a brand that the customer recognised and trusted. I remember the first time I travelled to Seattle I stayed in the Hilton chain, because I trusted its high brand’s quality, an essential requirement if you were never in a city before.

During that time, hotel chains integrated the property that offered rooms with the trust of the user experience, leaving the reservation mechanism in the hands of others (modularising/outsourcing), something that was usually carried out via a travel agency. As the Internet get more comprehensive, new players broke in the market. Let us take a look at the example of Airbnb, which allows anyone to rent a room or a property. In this case, the market began to function differently.

The Internet transformed trust in digital through an excellent user experience and the possibility of using the reputation whereby guests could vote on their stay with a particular host. In this way, the trust becomes a digital asset and the property modularised/outsourced.

Now with trust became a public asset  (which no longer belongs to the incumbent of the monopoly) and the fact of being digital and integrating with the reservation system (Website), it is no longer necessary for the property to be located in the same place, any apartment or room in the world could be a candidate.

What was in the past a monopoly of a brand linked to trust, has now changed to become digital, which made the brand no longer hold the most important value, but rather the focus became in the experience that the user had from the moment of their reservation until the end of their stay.

Think about a taxi firm, in the past it monopolised the cars and the despatch of them, and in several cases, the reservation system and the payment system (credit cards) were outsourced.

Now with Uber, Lyft, Cabify,etc. trust has again become digital through the opportunity for the passengers to rate drivers and vice versa. At the same time, the cars have been outsourced/modularised (it could be any working car in the area!) and the system of dispatch and payment is integrated in the Web platform.

In all cases trust has become digital, which makes profits move in the direction of these new companies and generates losses among the original “owners/incumbents” of the market.

This is what the Law of conservation of attractive profits predicts: when a disruption appears in the market, the money that is lost by whoever used to have a monopoly is transferred to another adjacent stage of the chain.

In the future we could see other players in the travel industry, banks, airlines, etc. enter into the market where the digitisation of trust allows the most important factor to be the user experience from start to finish without taking into account who is effectuating the transportation.

A small exception to the digitisation of trust perhaps does exist, and it is the concept that both the service is excellent and the price is very reasonable. For example, in Spain the taximeter service is excellent, the cars are new and they are always clean, with friendly staff and reasonable prices. There is certainly a lot less of an impact of the digitisation of trust on its modularisation, or its impact is due to the adjacent companies or services. But… I know few companies where the customers are very satisfied and consider the prices of the service to be more than reasonable.

It is in this way that the focus of the software creation itself no longer revolves around computational tasks or features in order to resolve a specific and temporary problem but rather in satisfying the customer from beginning to end, and if the company longs to survive, it must focus and now transform the Scrum/Kanban, or whichever other Agile framework is used in User Experience Teams.

The understanding of this latter discipline being the new centre of the universe of the organisation, and the consequent changes to the structures of the teams and the organisation, are part of the urgent steps that are necessary for moving forward.

If you enjoyed this article, why don’t you check the second edition of my book for organizational consultants Leading Exponential Change? 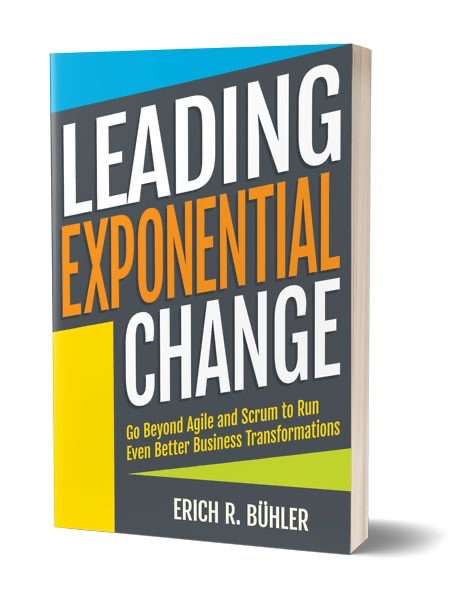